ORLANDO – English Premier League rivals Arsenal and Chelsea, two of the world's most popular and successful professional soccer clubs, will meet at Camping World Stadium in Orlando, Florida, on July 23 for the Florida Cup. The stateside derby will be the finale of a weeklong "FC Series" expansion featuring international matches across the United States.

The Florida Cup has taken place in the state since 2015, featuring clubs from all over the world. In 2022, the FC Series will extend the weeklong "Clash of Nations" festival to multiple venues.

Arsenal will play Orlando City SC at Exploria Stadium on July 20, a first-time meeting between the two clubs.

FCSeries.com. Broadcast information and official start times will be announced later this year. 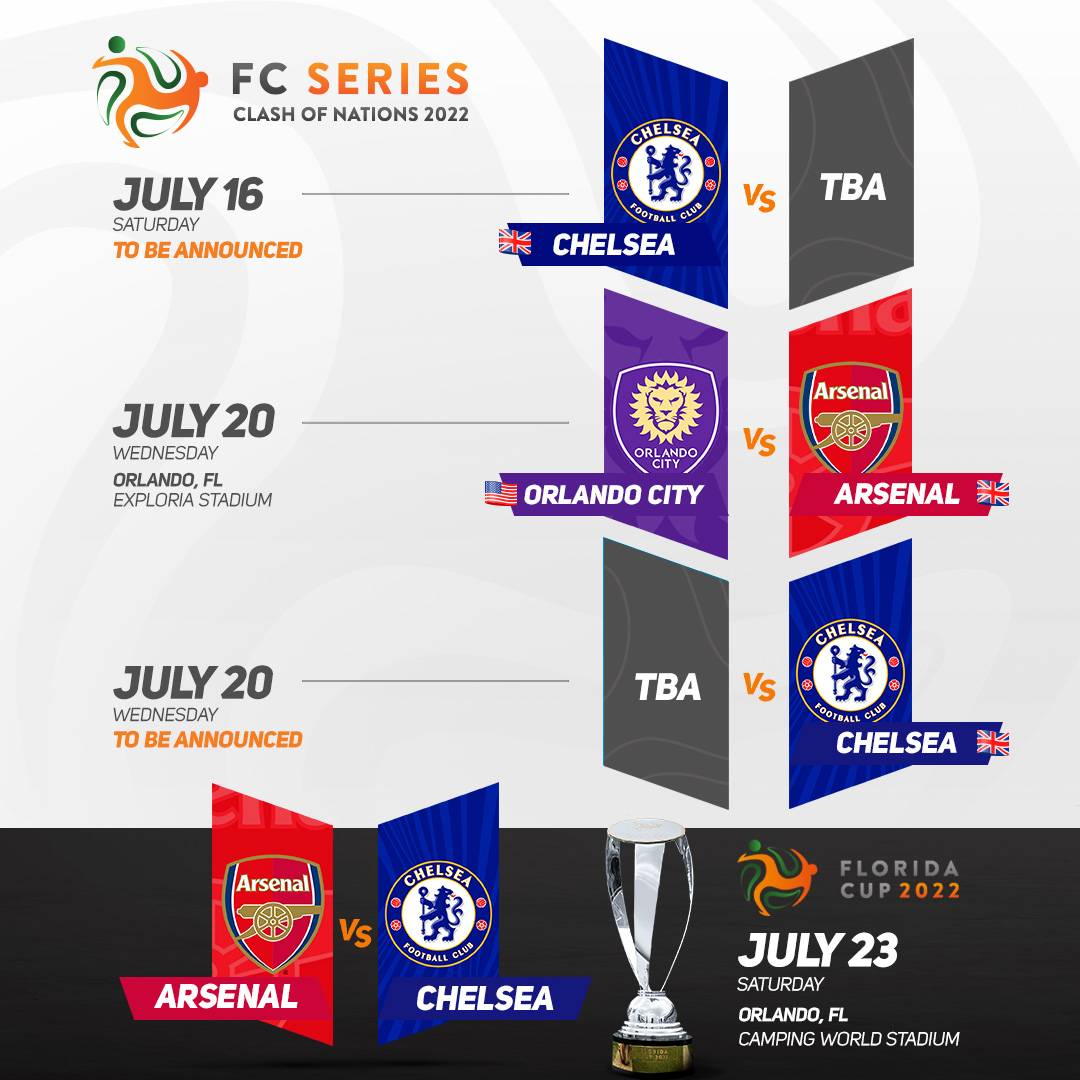 "We are thrilled to continue our tradition of connecting the globe through sport. We look forward to delivering a first-class experience to our English visitors with help from our partners locally in Orlando and across North America."

"We're very pleased to see our pre-season plans taking shape with the announcement of our trip to the United States to take part in the FC Series. It's been a long time since we've seen our fans in the US, and we're looking forward to playing in front of them. The tournament features some good sides that will provide strong opposition, and the training and matchday facilities in Orlando will provide a first-class environment for our preparations for next season."

"The FC Series, together with our Orlando training camp, will provide Mikel and the squad with an excellent level of preparation as we focus on next season. We look forward to confirming further plans for our pre-season very soon."

"We've always had a lot of success on our US tours, taking so many fans to the stadium's and giving them the opportunity to see Chelsea FC play live. We have a huge fan base in the US that we've proudly built and we've seen that fan base getting bigger and bigger every year. We are delighted to go and play in the FC Series and the Florida Cup, where in total we will have three competitive games to prepare well for our upcoming season and to show what we can do to the American audience."

"We're excited to be able to provide our fans and the greater Orlando soccer community the opportunity to experience one of the world's most iconic clubs, Arsenal FC, right here in the best soccer venue in America, Exploria Stadium. Not only will the friendly be a phenomenal experience for our fans, but we are excited to see our Lions take the field against a top international opponent. This is going to be a match that no one will want to miss."

"This game is a unique opportunity for us to host one of Europe's most recognized teams at Exploria Stadium. This is a great way for our players to get high-level gameplay and for our fans to see us match up with a very exciting Premier League opponent. We're looking forward to it."

The largest annual international soccer event in the Sunshine State, the Florida Cup is a global platform that combines sports, music and entertainment. In 2021, the event's international TV audience reached over 5 million unique viewers. Across social networks, content posted by official event pages and shared worldwide reached more than 100 million people. In 2022, the event expands to the FC Series featuring multiple matches across the United States. For more information on the FC Series, visit FCSeries.com, or follow us on Facebook, Twitter, Instagram and TikTok.

Florida Citrus Sports is a not-for-profit event management organization dedicated to positively impacting the Orlando region while enhancing the quality of life in Central Florida through world-class events, including the Vrbo Citrus Bowl, the Cheez-It Bowl, the Florida Blue Florida Classic, the FC Series and the Camping World Kickoff. For more information, visit FloridaCitrusSports.com.

Arsenal Football Club was born when a group of workers at Dial Square armaments factory in Woolwich decided to form a football team to break the monotony of factory life.

Since that Dial Square team played its first match against Eastern Wanderers in 1886, Arsenal has gone on to become one of London's most successful football clubs and one of the most famous names in modern football with millions of passionate followers worldwide.

Steeped in history and tradition, Arsenal Football Club has thrived on a pioneering and innovative spirit that has existed throughout its 134 years in existence. While society and football may have changed during this time, Arsenal has always served to create a sense of community for people in north London, across the UK and around the world.

Orlando City SC joined Major League Soccer (MLS) as the league's 21st franchise in November 2013, becoming the first MLS team in the Southeast. The Lions began league play in March 2015, and in 2017, moved into its privately-owned downtown soccer stadium. In 2022, Orlando City SC re-launched OCB as a founding member of MLS NEXT Pro to bridge the gap between its successful youth development academy and the First Team.

About Universal Orlando Resort
For more than 30 years, Universal Orlando has immersed guests in amazing moments. Across the award-winning destination, they can let go and live in the moment with those they care about most as they embark on incredible theme park adventures, like causing mischief with the Minions from Illumination's "Despicable Me," coming face-to-face with ferocious dinosaurs in Jurassic Park, walking the corridors of Hogwarts castle in The Wizarding World of Harry Potter and so much more.

Universal Orlando is home to three epic theme parks that feature some of the world's most exciting and innovative experiences, including Universal's Islands of Adventure – named the #1 Amusement Park in the World for five years in a row by TripAdvisor Travelers' Choice; Universal Studios Florida – home to the most technologically-advanced stunt show yet, The Bourne Stuntacular; and Universal's Volcano Bay - a tropical oasis like no other that features an actual beach right in the middle of Orlando.