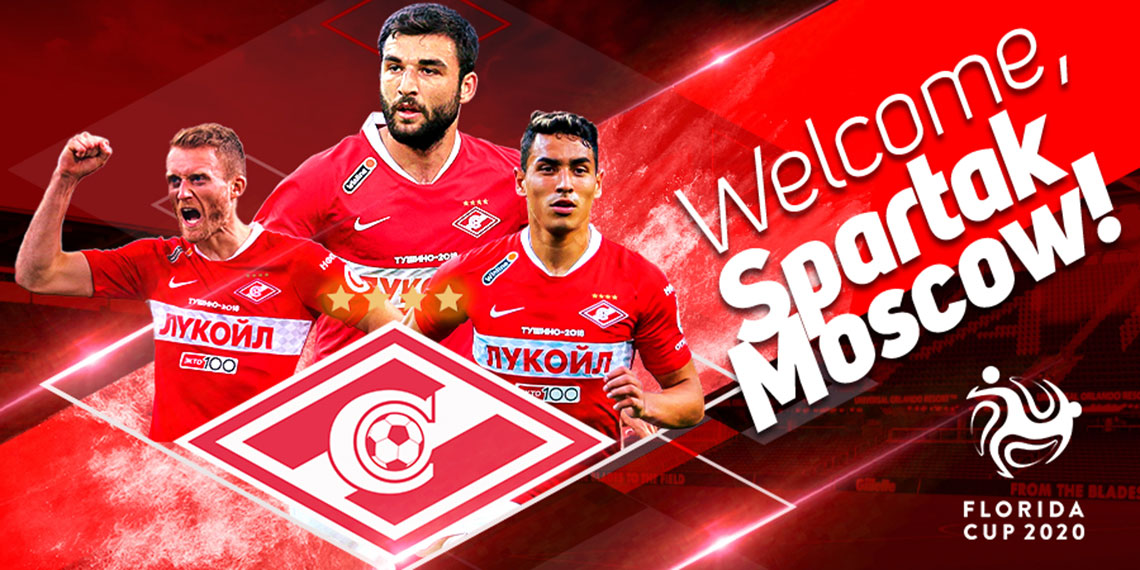 The first major international soccer event in Orlando for 2020, the Florida Cup will once again take place downtown at Exploria Stadium from Jan. 13 – 20. Exploria Stadium is the home of Orlando City Soccer Club, the Orlando Pride and the highly successful 2019 Major League Soccer All-Star Game.

Having won 12 Soviet championships and a record 10 Russian championships, FC Spartak Moscow is the country's most successful club. In addition, the club has won a record 10 Soviet Cups, 3 Russian Cups and one Russian Super Cup. Spartak Moscow boast an international roster with players such as André Schürrle, 2014 FIFA World Cup champion with Germany.

Spartak Moscow CEO Tomas Zorn said, “The Florida Cup experience will be a completely new and unique for Spartak Moscow for a number of reasons. First, we will launch our winter break preparations period in top facilities for training and testing. Secondly, we will play against very strong and interesting opponents – our fans will be fascinated to watch Spartak versus some leading teams of South American soccer.  Last but not least – participating in the Florida Cup is an opportunity to increase our fanbase overseas. And I hope as the result, Spartak will win more fans in United States.”

Florida Cup officials also announced a special kickoff exhibition match will be played between Bundesliga sides Hertha Berlin and UEFA Europa League semi-finalists Eintracht Frankfurt at Al Lang Stadium in St. Petersburg. The exhibition match will take place on January 9, 2020, and will mark the official opening of the event.

“Our annual sports and music festival continues to draw diverse, first class clubs from around the world to Central Florida. We are excited to welcome these clubs to our passionate soccer community, further demonstrating that we are a hotbed for international football.” said Ricardo Villar, CEO of the Florida Cup.

“By attending the event last January, we saw that the Florida Cup provides the ideal framework for our preparation for the second half of the Bundesliga season. In addition, we look forward to the match against Hertha and to strengthening our international activities,” said Frankfurt board member and former German international Fredi Bobic.

The match schedule and other updates will be announced in the weeks and months that follow. Fans can stay updated on all the latest news by registering at www.FloridaCup.com.

In addition to the matches to be held at Exploria Stadium, fans will have a week filled with entertainment for all audiences and ages, including the FC Legends 5v5 and the Florida Cup Fan Fest featuring international star Ivete Sangalo.

In April, event officials confirmed the return of Ivete Sangalo, one of the most popular artists in Brazil, as the main attraction of the Florida Cup Fan Fest 2020. She will perform for the second time at the Music Plaza Stage in Universal Studios Florida on January 19, closing out the event. In addition, special guests will be announced to share the stage with the singer.

In the 2019 edition of the Florida Cup Fan Fest, the show by Ivete Sangalo brought together an audience of thousands of people who enjoyed the electric and contagious energy of her performance.

"The atmosphere of the event this year was incredible, not only on the pitch, but also on the stage. It was the perfect combination of sport and music. Ivete took the event to a new level and we are extremely happy with her return to the Florida Cup," said Villar.

ABOUT THE FLORIDA CUP

The largest annual international soccer event in the Sunshine State, the Florida Cup is already a January tradition in Orlando, Florida – a city that welcomed more than 75 million tourists in 2018. In six years, the Florida Cup has become a global platform that combines sports, music and entertainment.

In 2019, the total live attendance of the event exceeded 40 thousand people and the matches were broadcast live in 103 countries. Across social networks, the content posted by the official accounts of the event as well as the postings of the influencers present at the event had a reach of more than 100 million people. For more information on the Florida Cup, visit www.floridacup.com, or follow us on Facebook, Twitter and Instagram.

Press and fans can now register on the site www.floridacup.com to receive notice of the opening of sales and other news about the event.