In a battle of goalkeepers, Everton’s Asmir Begovic stopped Juan Moreno’s penalty to earn a 10-9 shootout victory for the Toffees at the Florida Cup. The championship match at Camping World Stadium went to penalties after Demarai Gray’s second-half penalty cancelled out Andes Llinás’ opener for Millonarios. Begovic was awarded Man of the Match in his first Everton appearance as well as Everton’s first appearance in the U.S. since 2013. Millonarios last played in the Florida Cup in 2020, winning the event in 2018. 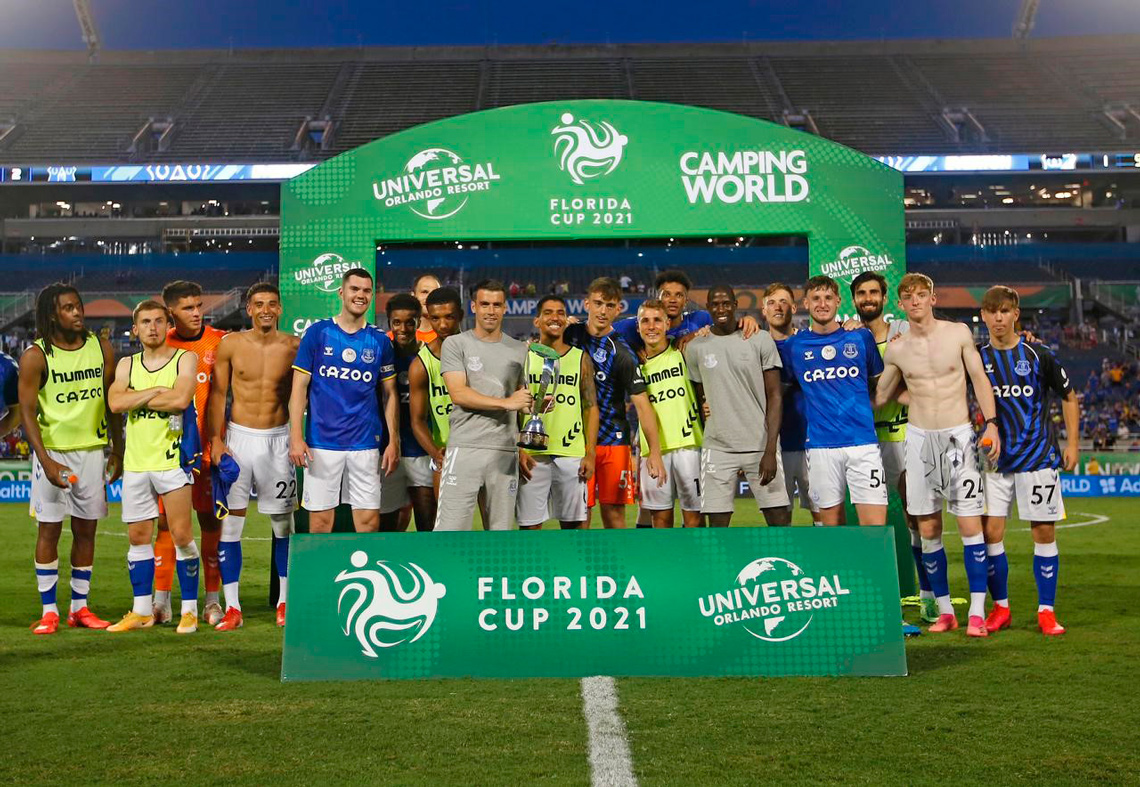 Millonarios entered the game with nearly the same starting eleven that defeated Deportivo Quindío over the weekend, including leading scorer Fernando Uribe playing as a lone striker in front of David Silva and Harrison Mojica, and Jorge Rengifo playing in place of Emerson Rodriguez. Juan Pablo Vargas and Llinás started in the center back with Stiven Vega as one of the defensive midfielders. Everton entered the match with Rafael Benitez’s first lineup with the club and put out a veteran side with Séamus Coleman and Lucas Digne in defense, Abdoulaye Doucouré and Alex Iwobi through the midfield, and James Rodríguez playing against a team from his home country. Newcomers Begovic and Andros Townsend made their first starts for the club, and youngsters Allan and Ben Godfrey rounded out the side.

Millonarios appeared to be the fresher team in the opening minutes, controlling a majority of the possession. Everton recorded the first shot on target with Townsend firing from distance, but the shot was corralled by Christian Vargas. Llinás had the first shot for Millonarios minutes later, but his low drive was pushed aside by Begovic. But it was Llinás who put the Colombian side on the board first in the eighteenth minute when he tapped home his own rebound after his header from a corner bounced off the post. The goal came after Rengifo dribbled through two Everton defenders and Godfrey forced the ball out of bounds.

Following the hydration break, Everton had a jump in their play as they came out in a high press. Moise Kean had a clean header in the thirty-first minute off a cross from Lucas Digne, but it sailed high of the target. Roman answered a minute later with a surging run forward and powerful shot from distance that Begovic steered away. Kean once again found space down the left side soon after but ran into a crowded Millonarios defense who were moving well as a unit. Andros Townsend nearly tied the game late in the first half, cutting inside to his left foot off a corner, but his bending dipper smacked the crossbar. The game grew a little sloppy late in the half with Séamus Coleman coming through the back heels of David Silva to earn the game’s first caution. Juan Carlos Pereira brought out a yellow again with high challenge on Digne. The two teams went into the locker room with the Colombians holding the edge.

The second half brought on five changes for Everton with Jonjoe Kenny, André Gomes, Nathan Broadhead, Anthony Gordon, and newcomer Gray, who signed this week from Bayer Leverkusen coming on for James, Kean, Coleman, Townsend, and Doucoure. Millonarios changed keepers at the half with Vargas off for Moreno. Everton carried more play throughout the early stages of the second half with Broadhead getting off a shot that passed wide of the goal in the fifty-first minute. Five minutes later, Gordon got on the end of a through ball and was clear to goal but the veteran defender Roman slid in to knock the ball away.

Everton scored the equalizer in the sixty-fourth minute on a penalty by Gray. Broadhead received a lovely through ball from André Gomes and found himself with only Moreno to beat, but he was taken down by the Millonarios keeper after slipping to the side. Gray calmly stepped up and converted the penalty for his first goal with the Toffees.

Broadhead almost put Everton ahead in the seventy-ninth minute with a charging run down the left side, but his right-footed shot missed the corner and Moreno made the save. Neither team appeared pressed for a winner as the final minutes ticked away with changes of possession and busted attacks, leading to penalties at the end of regulation to decide the championship.

In penalties, both teams missed once with Begovic stopping Ricardo Marquez’s shot followed by Gordon hitting the crossbar. After that, the two sides were perfect until it came down to the keepers and Begovic’s heroics.