Brazilian Powerhouse S.C. Corinthians is Confirmed for the 2020 Florida Cup 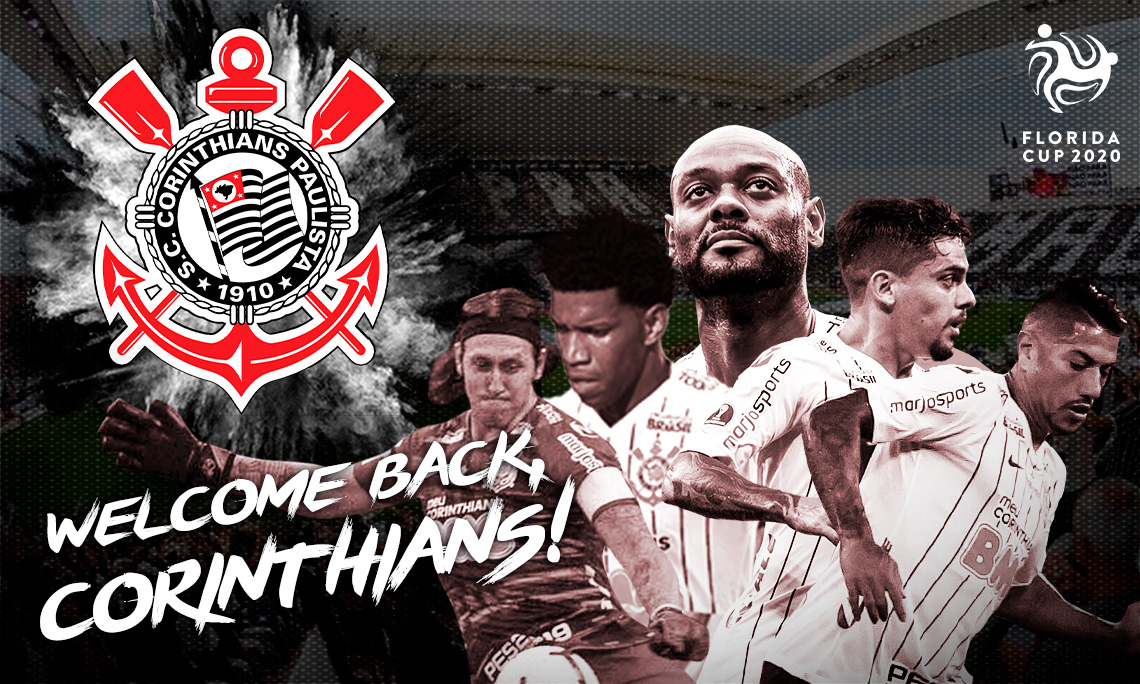 Officials with the 2020 Florida Cup, the sixth edition of Florida’s largest annual international soccer tournament, announced today the third participating team for the upcoming event in January in Orlando. Current three-time champions of São Paulo and two-time champion in the last four editions of the Brazilian Serie A, the country’s top flight, Sport Club Corinthians Paulista will return for a record fifth Florida Cup appearance in the 2020 edition.

Head Coach Fábio Carille, who led Corinthians in two prior editions of the Florida Cup, cited the superior conditions and excellent pre-season preparation afforded by the Florida Cup and the Orlando area as their reason for returning a fifth time. “Participating in the Florida Cup is very important for our preseason. We will have three weeks of intense preparation, and in the second week we will play international matches with very competitive opponents. It is a very well-organized tournament, with great structure and top-class participants. It was an experience that added to our work in the other seasons, and the event has everything to deliver the same result for us to start well in 2020,” he said.

“We are thrilled to welcome Corinthians again to Orlando. It is a club that has, on several occasions, been able to follow up their excellent preparation in the Florida Cup by victorious seasons in their home campaigns,” said Ricardo Villar, CEO of the Florida Cup. “In addition to the first-class condition of training and matches, the event offers a number of options for entertainment and unique opportunities for club and partner activations,” he concluded.

Corinthians joins Palmeiras and Atletico Nacional, which were already announced in June. The fourth participant will be announced in the coming weeks, along with the match schedule and other updates in the weeks and months that follow. Fans can stay updated on all the latest news by registering at www.FloridaCup.com.

In addition to the matches to be held at Exploria Stadium, fans will have a week filled with entertainment for all audiences and ages, including the FC Legends 5v5 and the Florida Cup Fan Fest featuring international star Ivete Sangalo.

One of the most successful activations in the 2019 edition, the FC Legends 5v5, is also confirmed for 2020 on January 16th. The event, which features global icons from the history of world football that have played for the clubs participating in the Florida Cup, will be played in a playoff format in an arena set up at the Universal Studios Florida theme park, one of the great partners of the event.

The last edition was attended by such big names such as Zico, Denilson, Falcao, Raí, Edwin van der Sar, Fredi Bobic, Lugano and others. Event officials and participating clubs will announce in the coming months the idols that will represent them in the 2020 FC Legends 5v5.

In April, event officials confirmed the return of Ivete Sangalo, one of the most popular artists in Brazil, as the main attraction of the Florida Cup Fan Fest 2020. She will perform for the second time at the Music Plaza Stage in Universal Studios Florida on January 19, closing out the event. In addition, special guests will be announced to share the stage with the singer.

In the 2019 edition of the Florida Cup Fan Fest, the show by Ivete Sangalo brought together an audience of thousands of people who enjoyed the electric and contagious energy of her performance.

"The atmosphere of the event this year was incredible, not only on the pitch, but also on the stage. It was the perfect combination of sport and music. Ivete took the event to a new level and we are extremely happy with her return to the Florida Cup," said Villar.

ABOUT THE FLORIDA CUP

The largest annual international soccer event in the Sunshine State, the Florida Cup is already a January tradition in Orlando, Florida – a city that welcomed more than 75 million tourists in 2018. In six years, the Florida Cup has become a global platform that combines sports, music and entertainment.

In 2019, the total live attendance of the event exceeded 40 thousand people and the matches were broadcast live in 103 countries. Across social networks, the content posted by the official accounts of the event as well as the postings of the influencers present at the event had a reach of more than 100 million people. For more information on the Florida Cup, visit www.floridacup.com, or follow us on Facebook, Twitter and Instagram.

Press and fans can now register on the site www.floridacup.com to receive notice of the opening of sales and other news about the event.